Arjun Set For The Return To Annapurna. 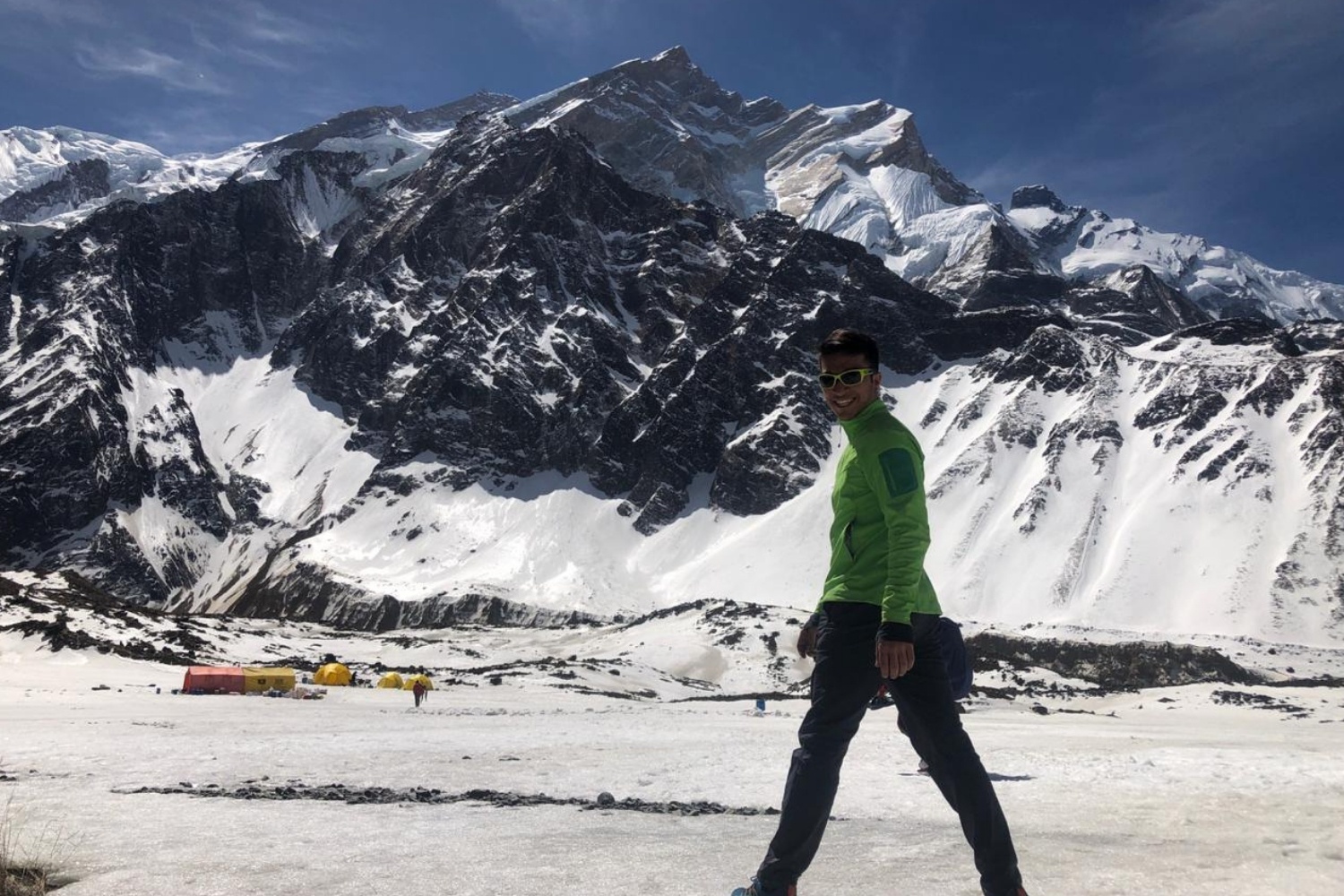 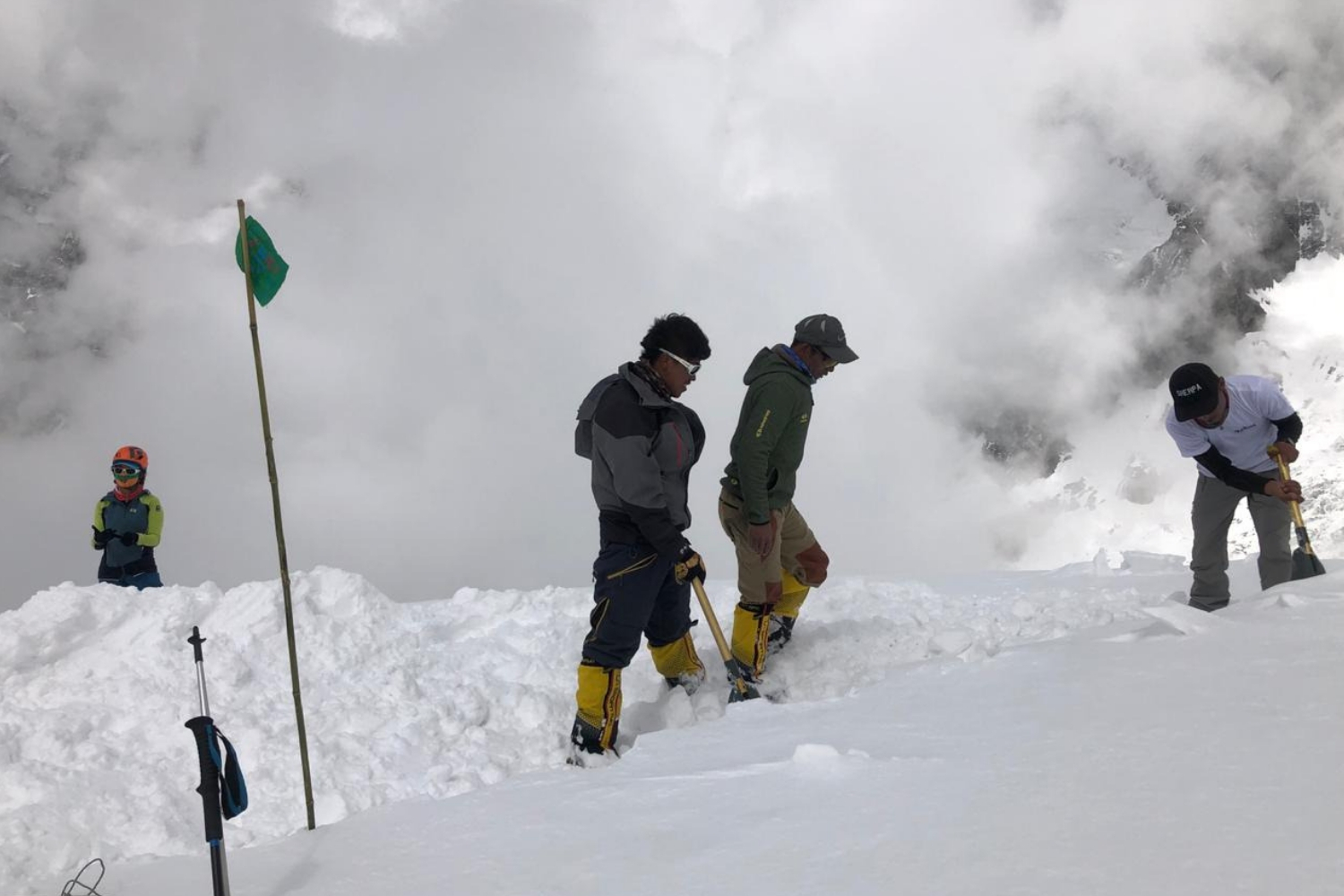 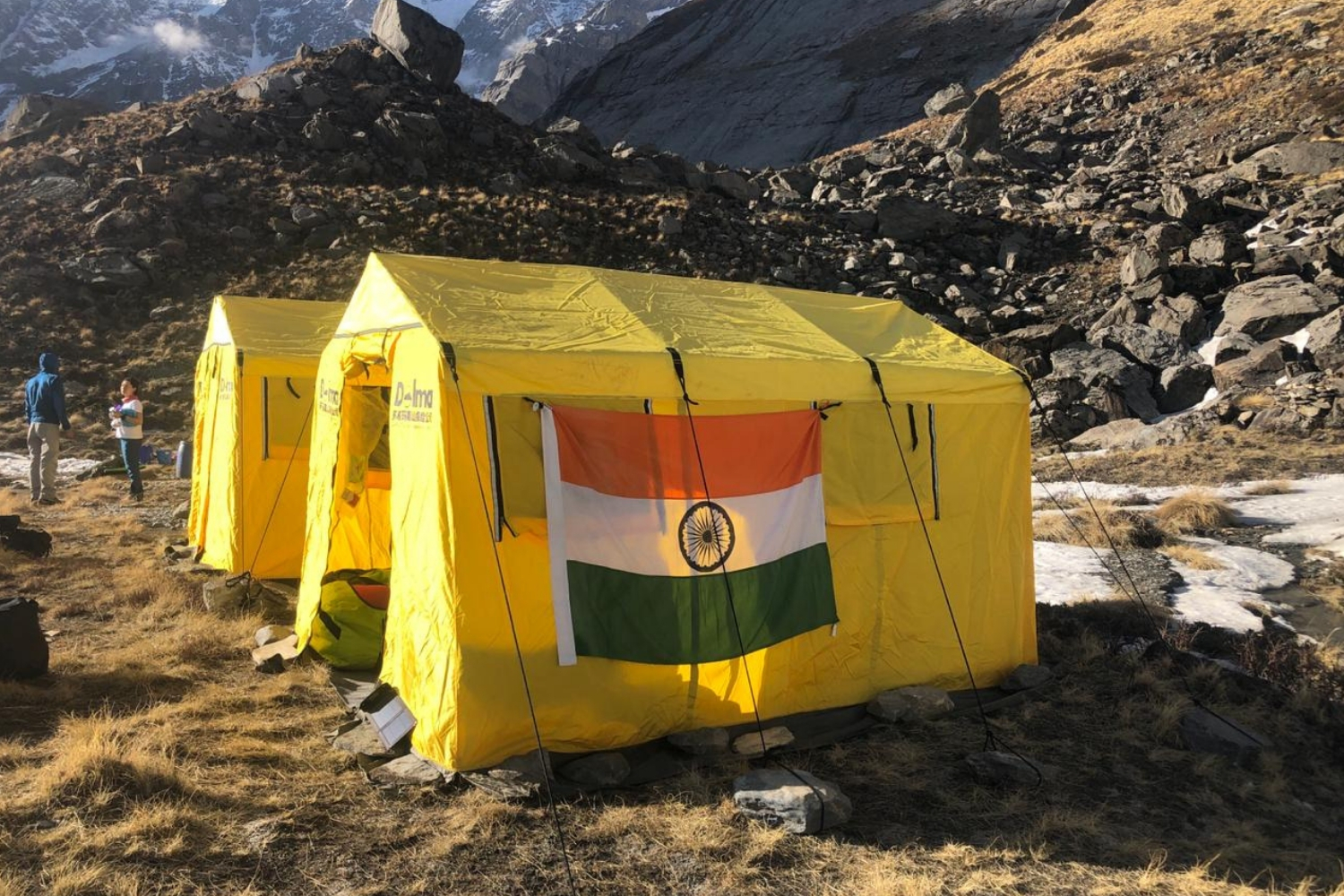 Youngest in the world to summit Annapurna I

After the weather denying the successful summit on Annapurna I, Arjun is all set and prepared to return to Annapurna and continue the expedition, after six days from today he will leave for the expedition

The lastest update of today from Arjun is as follows "Till now, I have not used supplementary oxygen during my entire journey and if all goes well, I will be attempting to summit Mt. Annapurna I without the use of supplementary oxygen. We had to set up another camp due to bad weather conditions, Camp 5 at 7350m. Between Camp 3 and Camp 4, while crossing an overhang section, an anchor came off and I fell down, taking down my Sherpa with me. My Sherpa got more injured and he had to descend back to lower camps. I'm just less than 800m short from the summit of Mt. Annapurna I now. Keep sending me you best wishes and pray for my successful journey ahead."

According to the updates received from Arjun today morning, they have successfully reached Camp 4 of Mt. Annapurna I yesterday i.e 11th May Arjun is safe and feeling good as communicated by him. Adding to it Arjun said that the Camp has been set at a higher altitude and nearer to the summit unlike the unsual. Depending upon the conditions they may go for a summit push tonight

Arjun and team were succesful in crossing the most difficult and the most technical part between Camp 2 and Camp 3 of Mt. Annapurna I today. The entire route was very steep and they had to navigate their way through steep ridges and technical terrain. Arjun and team started very early in the morning to avoid avalanches caused by melting of snow during the day time, but it still took them longer than expected as approaching the Dutch Rib and crossing alone took 8 hours, as quoted by Arjun in his update "It is by far one of the most difficult and technical ridges i have climbed" explaining how strenuous this challenge is. Along the way they did rope fixing for numerous patches which consumed crucial time and energy but makes the descent safe and uncomplicated. They reached an estimated height of 6590m and weather was in their favor during the complete journey. Now Arjun and team will indulge in setting up tents and boiling some drinking water and preparing dinner after which they will rest to recover themselves from this toilsome day and starting their journey towards Camp 4 next morning, they plan to setup Camp 4 high as possible to make the summit push easier.

Arjun Vajpai and his team, which comprises of 2 Chinese Mountaineers, 2 Italian mountaineers and 3 Sherpas were waiting for the weather to open up and get a clear summit window at the Basecamp of World's Most Dangerous and 10th Highest Mountain, Mt. Annapurna I. Mt. Annapurna I, stands 8091M high above the sea level, located near the Pokhara Region of Nepal, has the highest summit to death ratio (32%) and is one of the most avalanche prone mountain. Even as cyclone Fani left a trail of destructions in India and entered Bangladesh, it also impacted the weather in the Himalayas, disrupting Arjun and his team's schedule this climbing season. They were patiently waiting for a clear weather window which appeared to be arriving on 12th May and 13th May as per the weather reports.

As per the update, Arjun updated his location as Mt. Annapurna I Basecamp (4100m above sea level) from where on 9th May 6:30 am IST i.e today Arjun started his movement towards Camp 1 (5100m above sea level) the route towards camp was clearly visible but comprises of large blue ice patches. The route between Basecamp and Camp 1 is very challenging due to rock and ice terrain. Some areas requires climbers to cross the technical rocky terrain whereas some requires them to switch to snow boots to cross the triky ice terrain. After they reached Camp 1 at 11:00 am IST just to find it in a even tricky & spolied condition, Arjun and team took some rest before they headed to Camp 2 (5600m above sea level). The entire route between Camp 1 and Camp 2 was even more challenging and crevasses made the climb even more difficult. Ropes on Camp 2 route needed fixing as heavy snow fall in past weeks have spolied the ropes and trails of the route, Constant hide and seek with clouds is making weather freezing cold and hot at the same time. Conditions at Camp 2 are even more technical and challenging as there is practically no snow traces instead its covered with hard blue ice. After spending night at Camp 2, on 10th May around 6:00 am IST(as expected), Arjun and his team will move towards the most difficult part of the entire route next. The route between Camp 2 and Camp 3 of Mt. Annapurna is the most difficult and most Avalanche Prone. Arjun and team will attempt this hard straight climb which ends on the knife like ridge called the "Dutch Rib Route" to reach Camp 3 of Mt. Annapurna which is located at 6300m above the sea level.This route between Camp 2 and Camp 3 is also the widely affeacted by last week's weather so they might be climbing a variation of the "Dutch Rib Route", According to records most of the accidents and calamities occur between these two Camps. After reaching Camp 3 on 10th May (as per the current plan), Arjun and his team will rest and wait for altitude winds to settle down a bit and proceed towards their Final Camp, Camp 4 located at 7400 meters above sea level and prepare for the summit push on either 12th May, 2019 or on 13th May, 2019.
Arjun left for his journey for Mt. Annapurna I on 23rd March, 2019, along with his team from India and reached Kathmandu. After his arrival at Kathmandu, he was engaged in planning, preparing and packing for his journey ahead along with his expedition organising agency, Asian Trekking. He also visited the famous Pashupatinath Temple to seek blessings and pray for his safe and successful journey ahead. He left towards the Basecamp on 28th March, 2019, and since then he has been doing rotations to his Camps and waiting for a clear weather window.
In his decade long journey, all of Arjun's expeditions have been Eco - Friendly Expeditions. Arjun and his team has brought back more than the trash generated on the Mountains in past, and this year too Arjun is actively talking about effects of Climate change on our beloved Himalayas on his Official Social Media Handles. This year, with his Campaign of #Annapurna Calling and #ClimbAgainstClimateChange , Arjun aims to reach out to every Indian and encourage them to take a small step towards saving our mother Earth.

Arjun speaking about his plan ahead

In his recent post on his Social Media Handles, Arjun Wrote, “#AnnapurnaCalling After waiting for more than two weeks, it's finally arriving. The updated weather reports show that the winds are going to be as low as 10 Kmph on 12th and 5 Kmph on 13th. Looks like a window is forming. Past few days we have experienced heavy winds and worst possible weather. Against all odds, the team stuck together and now we are preparing to leave from the Basecamp towards camp 1 tomorrow. If it is ever going to be possible, it is now. I can hear the voice within, this is my real test. I will keep you updated about our movement tomorrow onwards."

BASE CAMP TO CAMP 1 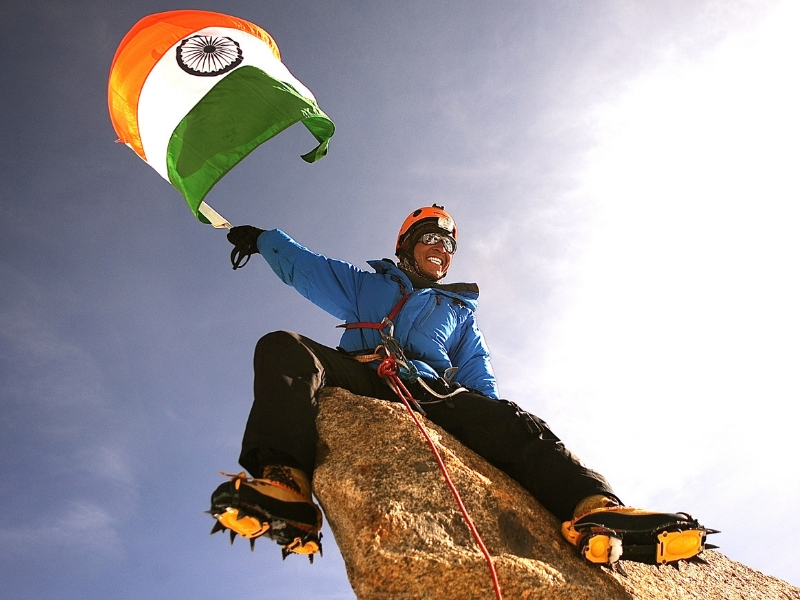 In a decade long journey which started in 2009, Arjun became the Youngest to reach the summit of Mt. Everest at the age of 16. He became the Youngest in the World to do so in 2010. In 2011, he became the Youngest in the World to summit 2 8000m Mountains (Mt. Lhotse and Mt. Manaslu) in one single year. Arjun was left paralysed in 2012 at Mt. Cho Oyu, World's sixth highest Mountain while attempting it and had to return. Arjun, being the unstoppable man he is, after a miraculous recovery from paralysis, returned to Mt. Makalu which he was able to summit successfully in 2016. In 2016, he also reached the summit of Mt. Cho Oyu, which left him paralysed in 2012. In 2018, Arjun reached the summit of Mt. Kangchenjunga, India's Highest Peak and World's Third Highest Mountain. With numerous World Records and National Records to his name, Arjun has his eyes set for his next challenge, Mt. Annapurna I. He is chasing the dream of becoming the Youngest Person in th World and the Only Indian to summit all 14 8000m and above mountains of the World. Currently, aged 25, Arjun has already been succesful in reaching the summit of SIX 8000m moutnains and is the Youngest in the World do do so.